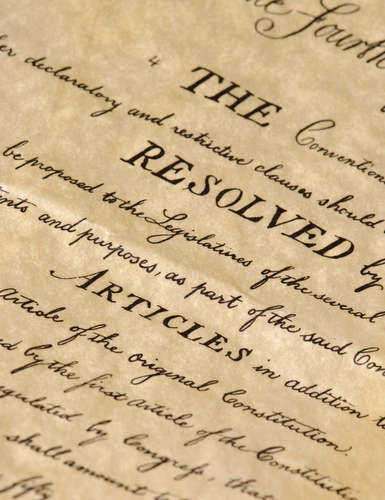 Although the subject of issuing the right to have a monopoly over an idea or invention is controversial, patenting and its benefits have been woven into the structure of the United States Constitution. The United States Constitution was founded under the notion that the progress of science and useful arts is important to the progress and future of society, and one way of doing this is to grant authors and inventors a limited period in which they may reap the full benefits from their hard work and labor.
Written during the Industrial Revolution, ideals of United States patent law reflect the immense strides in technology and engineering taking place during the time. The Industrial Revolution sparked innovation and inspiration to achieve new standards in technology and provided a glimpse of the potential of human ingenuity. A pro-patent environment would help to achieve new levels in technology.
The United States Constitution gave the power to Congress to create laws pertaining to patents. Under Article I, section 8, it reads, “Congress shall have power… to promote the progress of science and useful arts, by securing for limited times to authors and inventors the exclusive right to their respective writings and discoveries.”
The first U.S. Patent Act, which was passed into law on April 10, 1790, gave the power to the Secretary of State, the Secretary of War and the Attorney General to grant patents to inventors for creating devices and other engineering articles which have never been developed or used before. The granting of patents was usually based on the importance of the new invention, and deciding this was assigned to the discretion of these three positions of power.
The first modification was made to the Patent Act by Thomas Jefferson in 1793, who was then Secretary of State, to include a further defined description of patentable objects. Under this change, new and useful art, machines, manufactures or compositions of matter, or any improvements to these were considered patentable.
During the first three years of the establishment of patent law, only 55 patents were granted. In the next 40 years, over 10,000 were granted. As the structure of patenting began to grow, so did the need to modify its guidelines. Patent Law under the U.S. Constitution underwent its most recent and significant modification in 1952, establishing the modern patent structure in the United States.
The amendment placed further responsibility in the hands of the inventor, who was now required to describe the invention in great detail, in addition to the basis for its infringement. The other notable change was that inventions were required to be “non-obvious” to prevent inventors from taking ownership of common knowledge in a certain field.